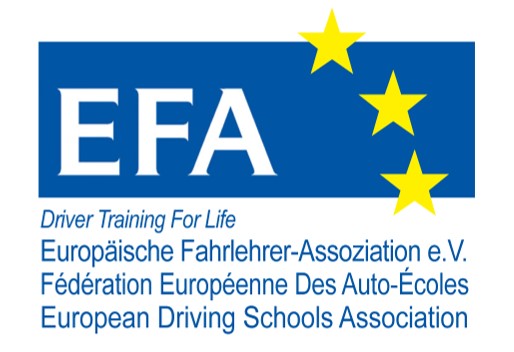 In 2013 I had the honour of being elected President of EFA, the European Driving Schools Association, and was re-elected unopposed three years later. This second term finished on 2nd May 2019 and I did not seek re-election.

Being President has been fascinating. It has given me the opportunity to travel widely across Europe and I have visited about 25 of the 44 European countries, 20 of them in the EU.

EFA has 23 member countries most, but by no means all, are EU members. I have had the opportunity to visit the EU Commission in Brussels and talk to officials on numerous occasions. I have spoken at the EU Parliament and talked to various MEPs.

I think that the most surprising thing to me has been the different aspirations of driving instructors and schools in different parts of Europe. Many ADIs in GB believe that we should introduce compulsory driver training here. They fail to consider that the most recent country (Ireland) to introduce compulsory practical driving lessons requires students to take a minimum course of 12 hours. Others suggest that private practice should be banned (despite evidence that, as with most things, practice makes perfect or at least better!). In Germany, where only qualified instructors can provide training, the number of lessons taken averages at around 30, compared to Great Britain, where we tend to see nearly half as many again, at 45. If we adopted the German system we could effectively cut theincome of the driver training industry by about a third! Please be careful what you ask for.

Other interesting things I have observed on my travels: in Estonia instructors often don’t know if their pupils have passed their driving tests. Students book their own tests which are conducted in government-provided vehicles and the instructor only knows the result if the student bothers to call them and tell them. In Portugal each test is twice as long as in Britain but not for the reasons you think: the candidate drives off and after about half an hour swaps with another candidate who was sat in the back, who then drives the party home. I wonder what they do with the SE Tests and the ADI if he/she wants to sit in?