Everyone has an opinion on road safety

I recently attended a meeting called by the Department of Transport to discuss its Call for Evidence Cycling and Walking Investment Strategy: Safety Review.

We were asked to respond to questions posed in the review document and while I expected some different points of view I was somewhat surprised at the huge diversity of opinions expressed by the different interest groups in attendance.

The most surprising thing for me was that one group were totally against shared spaces, which have been the subject of considerable discussion by driver trainers in the past. For those not familiar with the term, shared space is an urban design approach that minimizes the segregation between modes of road user. This is done by removing features such as kerbs, road surface markings, traffic signs, and traffic lights.

It has been suggested that, by creating a greater sense of uncertainty and making it unclear who has priority, drivers will reduce their speed, in turn reducing the dominance of vehicles, reducing road casualty rates, and improving safety for other road users. It’s an issue has been covered at length in  the MSA GB publication Newslink in the past.

While a variety of opinions have been expressed, most views I have heard previously have been positive regarding these systems, with some ADIs travelling considerable distances so that their learners can experience the – some would say – slightly surreal sensation of driving without controls and barriers. 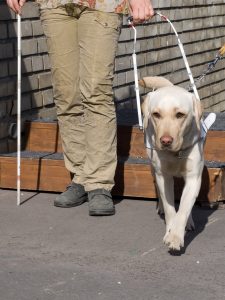 However, one group remain totally against shared spaces. I was in a discussion group with a visually impaired chap and he said, “How can sharing a space with vehicles and cyclists be safe if you can’t see what’s coming? He went on to explain that while it’s claimed that the heightened perceived risk of the shared surface means car drivers will drive more cautiously, considerately and more slowly, their impact on blind and visually impaired people can be striking.

With no kerbs, no safe crossing points and reliance on eye contact, shared space systems turn such areas into no-go zones for him and other visually impaired pedestrians. He also explained the importance of kerbs for navigation for both cane users and those reliant on guide dogs.

So, another great idea in theory comes up against the difficulty of operating in the real world.

These are some of the questions and some of the points raised. They are all written in a random way, but I hope you get the idea, that there was not one big idea but a variety of different ones being discussed.

– Do you have any suggestions on the way in which the current approach to development and maintenance of road signs and infrastructure impacts on the safety of cyclists and other vulnerable road users? How could it be improved?

– Properly designed junctions are needed to improve pedestrian and cyclist’s safety.- All pedestrian crossings should be light controlled, no more zebras and all crossing buttons should be fitted with rotating cones.

– Please set out any areas where you consider the laws or rules relating to road safety and their enforcement, with particular reference to cyclists and pedestrians, could be used to support the Government’s aim of improving cycling and walking safety while promoting more active travel.

– Make the penalties for injuring or killing pedestrians and cyclists much tougher, including lifelong driving bans and prison.

– Do you have any suggestions for improving the way road users are trained, with specific consideration to protecting cyclists and pedestrians?

– Compulsory training for cyclists and a cycling riding test and licence.

– New drivers must take a cycle training course before they take a driving test.

– Theory training for new drivers to include attitudes to cyclists and pedestrians.

– Do you have any suggestions on how we can improve road user education to help support more and safer walking and cycling?

– What can Government do to support better understanding and awareness of different types of road user in relation to cycle use in particular?

As you can see, a complicated mish-mash of ideas and concerns that give you some idea of the way other stakeholders see what appears to be, on paper, a reasonably straightforward affair.

Good luck to those trying to make cycling and walking safer; it’s clearly not an easy task with no quick fixes. It will be interesting to see what comes forward from this consultation.