Pull up on the right 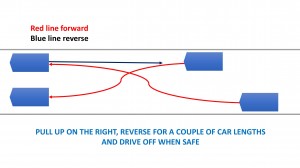 At the recent MSAGB National Conference and Training Day the question was raised – again – about the legality, validity and safety of the new exercise being tried out as part of the current driving test trial.

The member I spoke to thought the exercise was probably illegal it is not. At a meeting of the Association of Chief Police Officers (ACPO), now the National Police Chiefs’ Council (NPCC), Driver Training Strategic Meeting in November 2014 this matter was discussed it was explained that part of the driving test trial would be asking drivers to stop on the right side of road then reverse for a couple of car lengths before re-joining the flow of traffic. The group was asked for its views as to whether this manoeuvre would be illegal. It was concluded that “The only legality would be around night-time and lights.” At night when pulling up on the right it is best practice to turn off the headlights leaving only side lights. 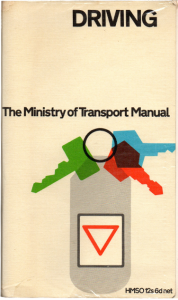 The member also questioned the validity of this exercise and the dangers of doing this at night. I suggested that as they were teaching all aspects of the exercise already I did not understand why they felt there was a problem. They denied this and said they would never teach anything like this at it is to dangerous and they would definitely never do it in the dark. They seemed offended when I respectfully suggested that they might not be doing their job properly.

My justification for saying this, is the right hand reverse. Whilst I’m not sure when the first official syllabus was published the Driving Manual published in 1969 and priced 12s 6d (62.5p) contained the advice below and the accompanying diagram.

Reversing into a side road on the right

This is a useful manoeuvre when there isn’t a convenient turning on the left, or you can’t see very well through the rear window. Fig. 46 shows that it is, in fact, two manoeuvres. The first is to cross to the other side of the road (after passing the junction). As with any other change of

direction, this needs full use of your mirror and proper judgment of position and speed. You should also take the opportunity to weigh up the side road as you pass it.

Reversing to the right

It seems all these skills were thought necessary over forty five years ago. The current Car and light van driving syllabus (category B) also clearly states, under learning outcome 3 that a driver needs to be able to “reverse to right” and needs to know and understand “how to reverse safely into a side road on the right.”

The trial manoeuvre Pull up on the right, reverse for a couple of car lengths and drive off when safe includes a similar, some might say identical, skills set to Reversing into a side road on the right. I think that proves the validity of the exercise on trial. 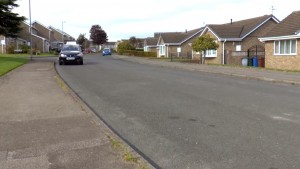 The member I spoke to also mentioned the danger of doing this excersise at night the National standard for driving cars and light vans (category B) scoping statement at the start of the document states that: “The content of this standard applies to driving: at any time.” That clearly includes night or day. So clearly it is the job of driver trainers to ensure that new and experienced drivers can do right hand reverses safely even in the dark and therefore it follows that, in my opinion, they should be able to help learners to achieve the same skill level when they are asked to pull up on the right, reverse for a couple of car lengths and then drive off when it is safe to do so.

Footnote: Having re-read this blog I realise that I sound like a bit of an evangelist for the driving test trial. I suppose I am, I think getting new drivers to learn things that are going to be really useful when they have qualified, like reversing out of a parking space after they have loaded the shopping, following directions to an event on a sat nav and being able to pull up safely on the wrong side of the road to pick up a mate are really important. Of course if members of MSAGB take a different view when it comes to the formal consultation I will represent that view – I hope they don’t.