In December I wrote about the British government launching a Road safety statement: working together to build a safer road system the proposals cover a wide range of road safety measures including learners being allowed to take a motorway driving lesson with an approved driving instructor in a dual controlled car. You may have noticed that I was not particularly enthusiastic about this proposal and I have received some comments about this from people puzzled as to why I was not applauding this triumph from the rooftops. After all, it is something that I have been involved in championing for many years.

A new year, a new Newslink and a new logo for MSA GB 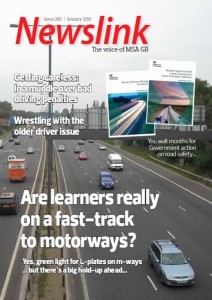 When the MSA GB launched Newslink back in 1989, taking over from the previous MSA publication, News Journal, it was described by the then newly installed MSA GB chairman the late Ron Feltham as “Newslink, all shiny and new”. He went on to say that he had some input into the decision to the change of title and the style of the publication.

His naval background influenced many of his ideas; his options for a new title were probably something daft like ‘Splice the main brace’ or ‘Aye, aye, skipper’; thankfully, we did not pick anything as foolish as Aye Aye.